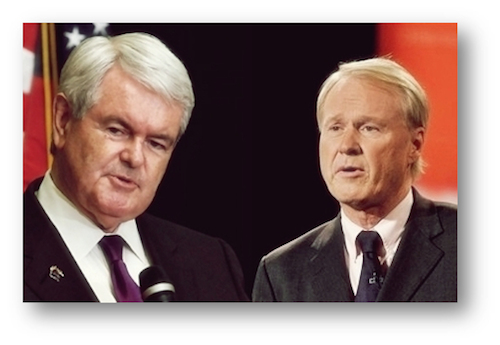 In this election, we on the right have to come to grips with the fact that we are dealing with a bunch of weasels. The left has no honor, no shame, and no dignity. They throw around the word “racist” to describe us not only without evidence, but at the same time they themselves engage in actual racist practices.

Chris Matthews, earlier this week, was frothing at the mouth because Newt Gingrich called Obama the “food stamp president”. On one hand, progressives and leftists love telling us that more white people collect food stamps than black people. But somehow, they argue, it’s racist against black people for mentioning food stamps. But, good old Newt wasn’t having it. He turned it all back on Chris in that way that only Newt can. He asked, “What kind of racist thinking do you have?” We need to start turning their racism back on them. Let the American people see the left for what they are, a bunch of racists who can’t win or obtain anything without slandering their opponents.

This brings me to Tuesday night at the Republican National Convention. We had a number of racial minorities giving speeches last night: Artur Davis, Mia Love, Ted Cruz, and Brian Sandoval all spoke last night, but the racists at the left-wing networks didn’t cover any of their speeches. MSNBC just showed commentary of their anchors instead of the minorities on our side. The fact of the matter is, we had more minorities on stage than work at MSNBC. So will Chris Matthews, the foaming at the mouth loon who thinks referring to food stamps at his network is racist, denounce his own network? Don’t hold your breath.

Meanwhile, on the floor of the convention, Chuck Todd and his goatee were roaming around, telling all 4 of their viewers that all of the non-white attendees were “strategically” placed and that they were nothing more than tokens. Todd proved that he is nothing more than a race-baiting, Obama shill.

More racism from the left: after Mia Love’s speech, where she was one of the few who actually took it to Obama last night, her Wikipedia page was defaced.

From Wikipedia: “Ludmya “Mia” Bourdeau Love”’ (born 1975) is a dirty, worthless whore who sold out her soul in the name of big business and the mayor of [[Saratoga Springs, Utah]], and the Republican Party 2012 nominee in [[Utah’s 4th congressional district]]. She will face six-term incumbent Democratic Representative [[Jim Matheson]] for the seat in November 2012.

And then, the Congressional Black Caucasians, er, Caucus came out before Artur Davis’ speech to denounce him in a letter, part of which reads, “We are writing to express our disdain over several recent comments you have made about the important issues facing voters in November, your total distortion of President Barack Obama’s record, and your complete flip-flop on certain core principles you once held dear.” They accuse him of being a political opportunist because he lost the primary for governor of Alabama back in 2010. So because Artur Davis isn’t voting for Obama, it’s time to question his motives. The only thing about their denouncing him that surprises me is that they didn’t trot out the “Uncle Tom” accusation on him.

We need to stop cowering in fear of these people. They are the real racists, and from now until November 6th, every Republican that goes on MSNBC needs to start their interview by asking, “How come you blacked out all of the blacks that are speaking at our convention? Do you have something to hide?”