Tuesday afternoon former Congressman Robert Wexler strode out on the DNC Convention stage as Gary Glitter’s Rock and Roll Part 2 pumped up the smallish 20K crowd. With almost no introductory words, Wexler dove into the reason for his appearance as Obama’s Jewish advocate, “Four years ago I stood at the convention podium in Denver, affirming Barack Obama’s heartfelt, steadfast commitment to the state of Israel. Over the past 4 years, the president has proven this commitment time and again, in both word and deed.”

What? He has? Funny, I don’t remember any trips to Israel? Here’s an excerpt from my July 30th article, “A Tale of Two Visits“, published at Red Pill Report:

First, we should remember that Obama prefaced the May 2011 visit with an extraordinarily arrogant assertion that Israel, in a move toward peace with Palestine, should recognize and return to the pre-1967 borders. Friends of Israel in America and around the world responded with incredulity and anger. Following such an ill-conceived and imperious speech, I was not at all surprised to see this chilly photo emerge (right: Benjamin Netanyahu and President Obama).

At this critical time, just over 3 months ’till the presidential election, all those pro-Israel and Jewish voters should take the time to remember that Obama, in his 1st term found the opportunity to visit some 32 different countries on 47 trips. However, the one very important country and long-time ally not visited? Israel. We should remember that Obama purposely bowed to Saudi King Abdullah, told outgoing Russian president Dmitry Medvedev that Vladimir Putin should give him more space until after the election, and foolishly proclaimed that Venezuelan President Hugo Chávez was no special security threat!

None of those actions remotely resemble “steadfast, heartfelt support”! Wexler continues, “And the Democratic party platform reflects the president’s unflinching commitment to Israel’s security and future as a Jewish state.”

Security? One wonders what in the world Wexler is talking about? Again citing my July 30th piece:

“…Obama prefaced the May 2011 visit with an extraordinarily arrogant assertion that Israel, in a move toward peace with Palestine, should recognize and return to the pre-1967 borders.”

Those pre-1967 borders would leave a vulnerable Israel. On Thursday, May 18th, Israeli Prime Minister Benjamin Netanyahu scoffed at Obama’s proposal as “militarily indefensible” and stated “…such a withdrawal would jeopardize Israel’s security and leave major West Bank settlements outside Israeli borders.” Bibi immediately recognized the threat to Israel’s security should his country revert to the pre-1967 6 days war boundaries. 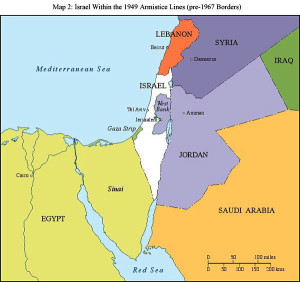 Secretary of State Henry Kissenger has weighed in, “…that Israel needs defensible borders and that Israel must not be pressured to withdraw to the 1967 lines.”  Deceased Israeli statesman and general, Yitzhak Rabin pronounced in his last appearance in the Knesset, “We will not return to the lines of June 4, 1967 – the security border for defending the State of Israel will be in the Jordan Valley, in the widest sense of that concept.” In 1980 he determined: “Our evacuation of the West Bank would create the greatest threat we can possibly face.”

Additionally, Mordechai Gur, when Chief of Staff for the IDF, “told Newsweek in May 1978 that as a military man he had no doubt that to defend Israel it was necessary to remain in the high ground of the mountains of Judea and Samaria – from Hebron to Nablus. He also explained that Israel needed to remain in the Jordan Valley.”

Robert Wexler praised Obama’s dealings with the middle east “Not only has he stood up to Iran, he has also bravely stood up for Israel in the international community!” Whatever the president has done, it has been insufficient to persuade Iran of the foolhardiness of continued nuclear weapons development. In fact, an August 30th New York Times piece reports, “For Prime Minister Benjamin Netanyahu, the International Atomic Energy Agency on Thursday offered findings validating his longstanding position that while harsh economic sanctions and diplomatic isolation may have hurt Iran, they have failed to slow Tehran’s nuclear program. If anything, the program is speeding up.”

A fine July 29th Hot Air article by Erika Johnson, Netanyahu: Obama’s sanctions haven’t hindered Iran by “one iota”, illuminates the well-deserved tepid relations between Netanyahu and Obama. So Wexler can wax eloquent and plead Obama’s case as a defender of Israel, but those of us paying attention are not buying the rhetoric.

As Wexler concluded his speech, the cameras panned the crowd, none of whom seemed to be listening and most of whom were all but drowning out his words with their conversations. Mr. Wexler ended, “Now is the time to support Israel as a thriving, democratic, and secure homeland for the Jewish people by re-electing Barack Obama as president of the United States!” And as if to mock his hollow words, the camera stopped twice on an uplifted sign with the words “Arab American Democrat”.

To quote a great friend and contributor of the Hugh Hewitt Radio Show, Yoni, “With Friends like Obama, I almost miss the good old enemies like Arafat.”

Reiterating my July article: “I hope every voter in America, and in particular every voter concerned with the future security of Israel and America’s unwavering commitment of friendship and steadfast support for that state, is listening and watching! We must choose between 2 disparate candidates:  either an incumbent who has emboldened America’s and Israel’s enemies, or a candidate who believes in a bold and exceptional America–an America that supports in every way its long-standing allies.

The choice could not be more clear:  Obama who habitually apologizes for America and insults Israel, or Romney who proudly proclaims America’s greatness and admires the democratic values and true friendship of Israel.  Here’s hoping all voters will choose the latter!”