13 years ago a unique project by David Lynch was championed and produced by Walt Disney Pictures: The Straight Story. This visually beautiful film recounts the true story of Alvin Straight, a weathered and wizened Iowan on a mission of reconciliation with an unwell brother, Lyle Straight, in Wisconsin. 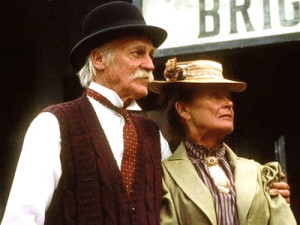 Alvin is masterfully played by Richard Farnsworth, a much beloved actor whom millions will remember fondly as the kindly Matthew Cuthbert from the endearing Anne of Green Gables series. Sissy Spacek is believable as Avin’s speech-impaired daughter, Rosie, and their stoically loving relationship is at once quaint and touching.

Rosie and Alvin’s small-town, midwest lives are interrupted by a phone call of news concerning Alvin’s estranged brother, Lyle (Harry Dean Stanton). In spite of bad hips and poor health, Alvin determines he must swallow his pride and begin a trek to see his brother which will span 377 Iowa miles via John Deere.

Alvin and Rosie watch a lightening storm in wonderment

David Lynch is better known for slightly bizarre movies (Blue Velvet, Twin Peaks), but with The Straight Story, emerges as a teller of a breathtaking, deeply touching film with a lasting message. This film is slow, but every frame will stun your mind with it’s emotion and beauty. The haunting score, from composer Angelo Badalamenti, features mournful fiddle and intensifies the montage of vistas along Alvin’s journey.

At one point, forced to delay his trip for a few days and “bivouac” on the property of some neighborly Iowans, Alvin is queried, “Haven’t you been scared being alone? There a lot of weird people everywhere now.” Straight’s answer is one more insight into the septuagenerian, “Well, ma’am, I fought in the trenches in World War II…why would I be a scared of an Iowa cornfield?”

This poignant movie should be in every film enthusiast’s library: life is so rushed and current events often ugly. The Straight Story brings a respite of human kindness and glorious vistas. I could not recommend more highly.