Now it is coming to the sad realization that the election results were not just a nightmare that would end when we woke up.  No, we have woken up and the nightmare is still with us.  Proof of this nightmare: President Obama has floated the possibility that he will name Senator John Kerry as Secretary of Defense and Ambassador Susan Rice as Secretary of State.  The one cabinet official he has pledged to keep is Attorney General Eric Holder.

Yes, you heard me right-Senator John Kerry-Secretary of Defense. Ambassador Susan Rice-Secretary of State.   These might be [if he goes through with his threat…I mean idea]  the two worst picks for these cabinet positions in our history.  Let me revise that.  These picks along with keeping Eric Holder as Attorney General would have to be the three worst picks for these positions in our history.

If John Kerry were to actually be nominated and confirmed by the Senate as Secretary of Defense, it would be a big slap in the face to all current troops and all veterans of this country.  In April, 1971 John Kerry as a Veteran Against the War gave disgraceful testimony before congress on the actions of his fellow troops during the Viet Nam war.  He related stories from what he calls the Winter soldier investigation in which “They told the stories at times they had personally raped, cut off ears, cut off heads, tape wires from portable telephones to human genitals and turned up the power, cut off limbs, blown up bodies, randomly shot at civilians, razed villages in fashion reminiscent of Genghis Khan, shot cattle and dogs for fun, poisoned food stocks, and generally ravaged the country side of South Vietnam in addition to the normal ravage of war, and the normal and very particular ravaging which is done by the applied bombing power of this country.”  While there is a dispute as to whether John Kerry threw away medals he got in the Viet Nam war, there is no dispute that he threw away ribbons he got, and at least gave back 9 medals [if not actually throwing them away] from the war.  It is not just the Viet Nam veterans who Kerry has disparaged, in November of 2006 he made a very disparaging remark towards all troops in the military when he told a California audience “Education, if you make the most of it, you study hard, you do your homework and you make an effort to be smart, you can do well. And if you don’t, you get stuck in Iraq.”  President Bush, rightly called Kerry’s comments insulting to the troops.   John Kerry tried to dismiss this controversy by saying he was joking. Ha, Ha.  I’ll let you look at the video and you see if he was making a joke [and if he was, it was still stupid and insulting to the troops]:

Now we turn to Susan Rice.  Really, Susan Rice as Secretary of State?  When Barack Obama was running for president the first time in 2008, I remember telling one of my Jewish relatives [who is pro Israel] of the danger I thought Obama would be on foreign policy, especially toward the well being of Israel.  I told her of all of the seemingly anti Israel people Obama not only associated with, but seemed to be conferring with as advisers on foreign policy.  One of those people I mentioned was Susan Rice. I mentioned her name from this article I read in American Thinker back in January of 2008. Quoting from the article by Ed Lasky: “Susan Rice was John Kerry’s chief foreign policy adviser when he ran for President. One of the major steps Kerry suggested for dealing with the Middle East was to appoint James Baker and Jimmy Carter as negotiators. When furor erupted at the prospect of two of the most ardent foes of Israel being suggested to basically ride “roughshod” over Israel, Kerry backtracked and blamed his staff for the idea. His staff was Susan Rice.”  When Obama won the election and named Hillary Clinton as Secretary of State, I was reminded by my liberal relative that I shouldn’t have worried so much about Obama’s associations as Hillary Clinton was pro Israel and he named her Secretary of State [not to dwell on the discussion that I had with my relative on this subject-I think I was proven to be right to worry about Obama and his relationship with Israel-but that is another matter].  Now Obama might be replacing the so-called pro Israel Hillary Clinton with Susan Rice, and the best you can say about that is there is not much evidence of Susan Rice being pro Israel.  Susan Rice has been one of the main advocates of joining the UN’s Human Rights Council, one of the most anti Israel organizations in the world. [an organization president George W Bush withdrew from because of the actual  anti human rights countries on the council].

Also, in February 2011, while the US vetoed the resolution by the Palestinian Authority to declare Jewish towns in Judea and Samaria illegal, Susan Rice amazingly went out of her way to add this “wink to the Palestinians” in her veto by saying this: “Our opposition to the resolution before this Council today should therefore not be misunderstood to mean we support settlement activity. On the contrary, we reject in the strongest terms the legitimacy of continued Israeli settlement activity. For more than four decades, Israeli settlement activity in territories occupied in 1967 has undermined Israel’s security and corroded hopes for peace and stability in the region. Continued settlement activity violates Israel’s international commitments, devastates trust between the parties, and threatens the prospects for peace.”

But even if you don’t think  those anecdotes prove anything about how Susan Rice views Israel and even if you think that she is pro Israel, Susan Rice still should not even be considered for Secretary of State because of how she has handled the Benghazi scandal.  For her to go on five Sunday talk shows a week after the Benghazi terrorist attack and tell the American people and the world that the attacks were just a spontaneous attack by a mob who were outraged over an American’s U Tube video [a video by the way that was put out many months before] was outrageous.  She was either blatantly lying or is so incompetent that she cannot even be considered for the high position of Secretary of State.

While those two possible nominations of the Secretary of Defense and Secretary of State are disturbing to me, even more disturbing is the one cabinet official Obama has been hinting he will keep-Attorney General, Eric Holder.  Eric Holder?  That is the first one in his administration who should have been dismissed.  Does anyone remember one of the first statements the Attorney General Eric Holder said in February of 2009, that the American people are “essentially a nation of cowards” in failing to openly discuss the issue of race. This man seems to be obsessed with race in making some of his decisions as Attorney General. One of Holder’s first acts was to drop the voter intimidation case against the Black Panther’s in Philadelphia. “Former Justice department official, J. Christian Adams, now an attorney in Virginia  says he and the other Justice Department lawyers working on the case were ordered to dismiss it.”  He claims Holder’s orders were racially motivated. Eric Holder also publicly chastised the Arizona law SB1070 [on illegal immigration] unbelievably without having read the law.  Then he ordered the Justice Department to sue Arizona over the law. Then there was the scandal of “Fast and Furious” in which an American border patrol agent was killed by guns released by someone in this administration and Holder supposedly knew nothing about it. That either shows blatant incompetence or a deceitful cover up by the Attorney General.  Also, the administration wants us  to believe that Holder, when he did find out what happened, never told the president of the United States.  Now we have the Benghazi terrorist scandal and the CIA director, General David Petraeus having to resign because of being involved in an extra marital affair. The FBI supposedly informed Eric Holder months ago about this extra marital affair of General Petraeus [the CIA director] and we are to believe Holder never told the president of the United States about it before the election. That shows incompetence on the attorney general’s part, or being a part of a cover up.   Eric Holder by being Attorney General is the head of Justice Department. Under him, there has been anything but justice. The InJustice Department may be more like it. I really fear another four years with Eric Holder as Attorney General of the United States. 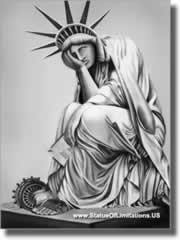