There’s this great episode of NCIS, titled Seek, from March 2013.

Wrapped in a plot, it is basically a tribute to service dogs – to their training, loyalty, and dedication – and to their handlers. At the end, Jethro Gibbs, the main character, observes,

Since I could never top that line, well, I stole it for this article. Gibbs summed it up well. Soldiers, Sailors, Airmen, Marines, Coasties or Policemen – regardless of their branch of service, in real life, these dogs save lives every day.

The episode was so touching that I decided to find out more about these dogs, and to see how realistic their portrayal was. For this, I realized, I knew just who to turn to – my friend John C. Steffens and his Military Working Dog named Abby. John graciously agreed to be interviewed, to tell me as much as he is allowed about his experience with Abby.

John is a Staff Sergeant Military Police Officer in the U.S. Army.  On his second tour, the Provost Master came to John seeking a Kennel Master for the brigade’s dog program. John volunteered. But when the unit was down-sized, so was John’s new position. John told them, “I still want to have a dog.”

So, the trainers at Vohne Liche Kennels sized John up and matched him with Abby, a 4-year-old Labrador Retriever. John tells me, “They do a quick check to find out how you are, how you are around other people, how you react to the dogs … they try to match you up to a dog with a similar personality.”

Especially in John’s case, it was a good match. John says he knew after the first day that Abby was “his dog.”

“A lot of other people were still trying to build that bond with their dog a week or two into the training. Abby was coming back to me with no problems whatsoever, wanted to be near me, didn’t want to be with anyone else a day into the training.”

They trained together for about eight weeks in the U.S., then three more at Bagram Airfield in Afghanistan, then two more at Jalalabad. Finally, they moved to F.O.B. Fenty and began to go out on missions with the battalion task force. 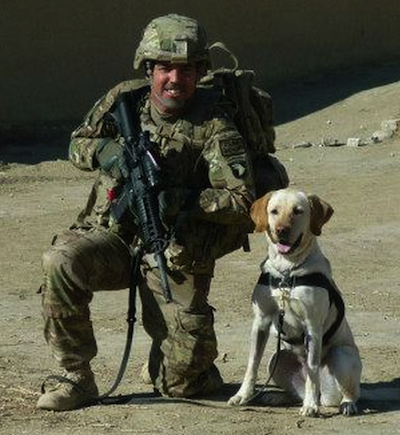 John did have a few anxious days with Abby during training. Eight weeks into it, they were getting ready to go for certification. Suddenly, Abby developed a bad habit. “There are certain things you don’t want an explosives dog to do,” says John, and Abby was doing one of them.

John worked with her through the entire weekend – Friday, Saturday, Sunday – two or three hours a day. Come certification day, the habit broke – Abby made it! That was a close one.

Before she met John, Abby had already served two tours of her own in Afghanistan, each for about a year. I asked John what it takes for a dog to qualify for this service.

“Drive,” he says, not breed. They have Yellow and Black Labs, German Shepherds, a Belgium Shepherd and a Pit Bull. Trainers work with them; do some scent training – odor work, rudimentary work. They train with live explosives, so they must be reliable. If all goes well, they’re ready to start with their handlers. Trainers must be careful not to bond with the dogs themselves so that the dogs are emotionally ready to bond with their handlers.

John and Abby have grown very close. I asked him what Abby likes best – treats, petting? John says, “Part of the Lab personality is she’s a very people-oriented dog. Anytime she can have contact with somebody, she’s happy.” Especially when that contact is with John!

“She loves to hear her name – Abby, Abby Labbie. You can actually call her anything you want, but it’s the inflection of the voice – if you’re happy and cheerful, then she’s happy.”

I asked John if Abby is defensive of him in other situations.

“She’s not an aggressive dog at all. But I have no doubt in my mind that she would have done just about anything if someone had gotten aggressive with me.”

Abby actually outranks John! That’s by design, John explains, “They always outrank the person that’s handling them. When the program started the dogs were classified as ‘military equipment.’ So if the handlers abused the dogs there was nothing that could be done to them. So what the military did was say, well, the dogs will outrank the handlers, and that way if you abuse the dog they can be charged under the Uniform Code of Military Justice.”

I asked John if everyone was as conscientious with their dog as he was with Abby. “Yes!” he exclaimed. “When you go through the eight weeks of training, it’s all about the dog 24 hours a day, all the time.” – except in this one case, as John recounted:

One of the things beaten into our heads was, “Dogs before self.” One of the guys in the class decided that taking care of himself was more important than taking his dog out of the kennel on a Sunday morning.  We weren’t doing any training that day, so there was no rush to get anything done.  He woke up at 7, instead of 6 and took a shower. Then he went and got breakfast in town, about a 20 minute drive.

Took his time eating, and then went shopping in Kokomo, about 45 minutes in the opposite direction, passing the hotel on the drive.  He finally got back to the hotel around 4 in the afternoon. Two of the other handlers and I fed his dog and took her out of the kennel every two hours, as was required. His excuse was, “Today is Sunday. We are off on Sunday, so I didn’t think I had to do anything with the dog.” He was dropped from training by Tuesday.

Tossed from the program!