Detroit is the canary-in-the-coal-mine of Liberal policy. In fact, there are over 100 major urban cities with similar problems.  These problems are epidemic, systemic, and self-perpetuating.

Liberals who have created these problems are the same ones who are called upon to fix them. Yet, they refuse to admit defeat. They won’t reverse course. They won’t renegotiate benefits or reduce costs. 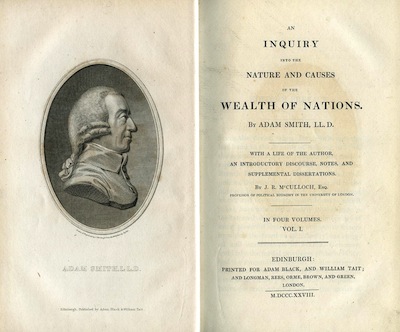 Why not? Just look at the gnashing of teeth provoked by the thrift of that little “sequester” last time around.

No politician wants to be in the position of being cast as the Grinch that stole mommies’ retirement.

It is tempting for the State to try to “provide” a living for its citizens. Reality, however, has the final say.

It’s a cautionary tale. Economically speaking, there really is only one solution:

It is laissez-faire, the discipline of Adam Smith.

Go bankrupt and deregulate! Or, if you prefer, deregulate or go bankrupt! Let the markets adjust for both products and labor, both public and private, to actual supply and demand. Privatize as much as possible. Get back to basics.

Regulate to preserve life, but to respect liberty, in the pursuit of happiness.

Laissez-faire is dismissed as “inadequate to deal with the social and economic problems caused by industrialization.” But if that does not perfectly describe the reality we face here, after 50 years of the Liberal Way, then I don’t know what does.

The great Taoist master, Laozi, put it this way in the Tào Té Chīng:

A wily citizenry will not stand for too much control. “The future” cannot be guaranteed, not for anyone or for anyone’s constituency, either by hook or by crook – or by mandate.

Not bad for an ancient Chinese guy. The more government interferes, the worse things generally get.

I think Adam Smith would agree. So would Calvin Coolidge and Ronald Reagan. So, too, would the tea-party mavericks, like Sarah Palin and Ted Cruz.

What of the GOP? Would Ryan or Rubio, Graham or McCain agree? Maybe, but I’ve not heard a peep from them on this. They seem to be too busy, pandering, to sound the alarm; chasing that bright, elusive butterfly of imaginary Hispanic and Black votes. Talk about fiddling while Rome burns!

Sage advice goes mostly unheeded these days. I don’t expect that to change – voluntarily, anyway– anytime soon. Just thinkin’, it might be something to consider before, say, importing immigrants. Just sayin’, if you want to see more cities like Motown, and eventually Washington, then by all means continue down this road – dead ahead, and keep Left.

“Tracks of My Tears” by Smokey Robinson and the Miracles

A New Yorker for Cuccinelli