In personal life, civility is politeness, and courtesy in speech and behavior, a sign of respect. In public life, civility is respect for the rights and responsibilities of others, the foundation of our Federalist Republic.

Civility, itself, is under assault by Barack Obama, the Democratic Party, and Leftists in general.

They believe that their ends are civil and justify their uncivil means; their ends being the reformation of America into a socialist utopia under their control.

Bush did not lie. The closest thing Democrats could find to a lie was his concern about WMD in Iraq, and his “16 words” in that 2003 SOTU. If only the media would parse Obama’s every word as they did with George W. Bush!

Obama, on the other hand, lies all the time. Do I have to repeat the litany? Don’t make me go there. If you like your truth, you can keep your truth, but not with Obama. Civility requires that parties be truthful.

When Bush had to go to war he made the case to Congress and got an Authorization for the Use of Military Force. Bush knew that popular support was necessary to conduct a war, so he did not rely on Presidential (Executive) power alone. His conduct of the war was subjected to constant scrutiny and criticism.

Obama bypasses Congress at every opportunity, scoffing at the need to get the consent of Congress and disregarding the War Powers Act. Obama is convinced that all he needs is a pen and a phone; but he also needs cover from a supplicant media, and political opposition that lives in fear of its own shadow. Uncivil!

Bush asked for advice from others; then he evaluated, and often followed it. He even listened to his Generals.

Obama and his inner circle really don’t seem to care what anyone else thinks, the essence of incivility. Obama only asks for advice when he wants to stall a decision.

Credibility is the father of civility.

When Bush painted a red line, no one doubted that he meant it. When Obama paints a red line, our enemies laugh and our allies shake their heads. 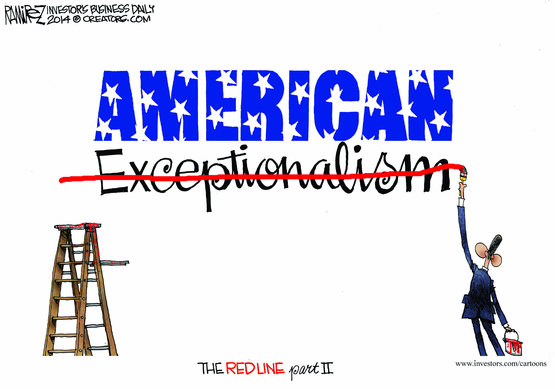 Bush scrupulously enforced the law, whether he liked it or not. He sought the Line Item Veto, to prevent “wasteful spending” and such, but was unable to get it. He therefore did what was required by law. Yet, the Left screamed constantly about his “Imperial Presidency.”

Obama, in stark contrast, openly flouts law, enforces provisions with which he agrees, and ignores those with which he disagrees. He rationalizes and “interprets” law to mean whatever he wants it to mean. Meanwhile, the media is completely uninterested in this, Obama’s lawless incivility.

For instance, Obama’s flouting of immigration law has made a mockery of our immigration system and has created a humanitarian crisis on our Southern border. The only immigration-related law Obama feels compelled to enforce is the Trafficking Victims Protection Act.

You can predict how Obama will enforce the law – it will be however required to further his political objectives. This is uncivil in the extreme. 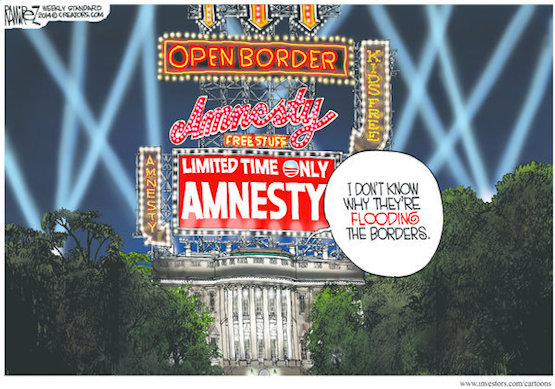 Bush acted as President of America, for all Americans – critics and political opponents, as well as friends and supporters. He didn’t disparage anyone from the office of the President.

Remember Cindy Sheehan? Remember when Bush signaled that he would be moving into “campaign mode” for the 2004 Presidential election, so he could feel free to criticize his virulent opposition?

Obama is always in campaign mode. He constantly criticizes his opponents. His list of racist, sexist, homophobic, tea-bagging straw-men is longer than Nixon’s enemies list.

And he uses the power of his office against them: DOJ, IRS, EPA, etc. If Bush did one of these things he would have been impeached, at least by the media. With Obama, the media are the enablers of this blatantly uncivil behavior.

Voting is perhaps a citizen’s most civic act. Protecting voter integrity with voter ID is a most civil thing to do. But Obama will have none of that.

There’s one time when Obama and the Left portend to be civil: whenever they can site the Bible or Jesus in support of one of their political objectives – when your “lack of compassion” prevents them from having the power or money they desire. They use our civility against us. That’s uncivil.

Obama – along with Reid, Pelosi, et al – is setting a dangerous precedent by institutionalizing incivility across the political spectrum. Over time, we will begin to acclimate and accept it as the norm, like they do in every “banana republic.”

Civility is the mechanism by which America can self-correct. America can probably survive bad policy, but only while the civility of self-governance enables us to change course – before it’s too late.

The Left’s war on civility will never end. Those who can take power will take it.

But if we are vigilant, we can recognize what they are doing, and look to those who would restore the civility of our Federalist Republic in the coming elections.

CPAC: Figuring Out What’s Next