There are two types of revolutionary: those who tear down countries and those who build them up.

Jay Parker is the revolutionary who builds his country up. In the 1960s, he chose principled patriotism and organizations like Young Americans for Freedom while liberals profanely protested and joined less reputable groups.

“Courage To Put Country Above Color” tells this epic story and how his behind-the-scenes presence closed what I call the, ” conservative gap ” between the Reagan Administration and like minded American Blacks, most notably his friend, future Supreme Court Justice Clarence Thomas. 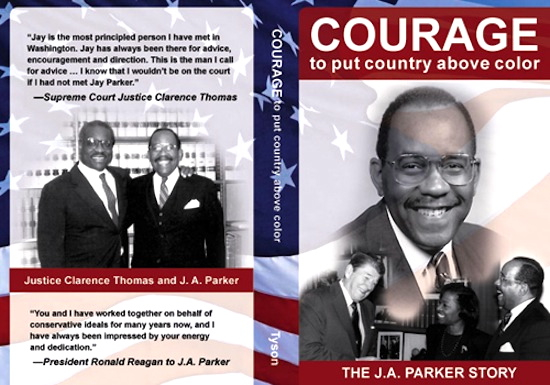 Mr. Parker tackled the very touchy issue of exposing communist infiltration and backing of some of the New Left’s Black show pieces. This same courage was later demonstrated while assisting South African capitalists at war with Soviet-supported, popular liberation fronts.

Apartheid was an absolute denial of the citizenship of Black South Africans, but handing the region over to the Soviets was a line Mr. Parker wasn’t prepared to cross.

This brought him considerable heat from liberal elites and challenged my thinking as someone who youthfully opposed Reagan’s constructive engagement policies back then, despite being a conservative.

Instead of an American communist revolt, Mr Parker spent his life fighting to preserve the American Revolution and extend its promise more fully in modern times.

We rarely hear about this type of American Black revolutionary, if at all.

His example of placing country above color is one of the reasons I founded American History Month as a conservative alternative to what’s become Black ( Liberal ) History Month.

Like Booker T. Washington, and even liberal champions of the constitution like Supreme Court Justice Thurgood Marshall, I am indebted to Mr Parker.

He showed me American Blacks can be revolutionaries who build up traditional values and free markets, instead of tearing them down.

Our revolution, like all Americans, is part and parcel of the one which freed the Thirteen Colonies from British rule.

“Courage To Place Country Above Color” the book about Jay Parker, is free and can be ordered as follows:

Request* your free, autographed copy of the book
Courage to Put Country Above Color, The J.A. Parker Story

*Please include your name, mailing address and phone number in your email request, or contact us by phone, fax, or mail with your information and request.