On Friday, January 17, during a radio interview, Governor Cuomo (my governor, sadly) asserted that pro-life activists, anti-SSM activists, and defenders of the Second Amendment are not welcome in the state of New York.

“Their problem is not me and the Democrats; their problem is themselves. Who are they? Are they these extreme conservatives who are right-to-life, pro-assault-weapon, anti-gay?

Is that who they are? Because if that’s who they are and they’re the extreme conservatives, they have no place in the state of New York, because that’s not who New Yorkers are.”

It’s long been established that the Left doesn’t respect opposing ideas and that they aren’t very good at even putting up a pretense of so doing.

I would like to thank Governor Cuomo and the defenders of his comments for being living examples of intolerance. 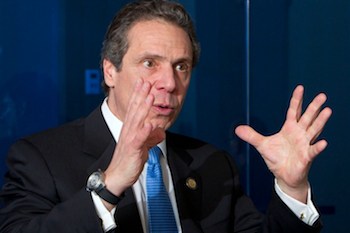 What does it tell you that the Left is defending his comments? The lack of denunciations within his own party is evidence they approve.

The Left can’t pretend to be tolerant of opposing views when they endorse these comments, whether through applause or silence.

The Left’s tacit approval of Cuomo’s intolerant remarks is proof of Buckley’s assertion, and also speaks to a form of Stalinism that has been en vogue for at least half a century.

TheLeft can pose as being morally superior, only by removing dissent from the argument.

Progressives don’t level the playing field, they clear it of all opposition. It’s easy to win the argument when there’s no one left to argue with.

Cuomo has demonstrated, in fine form, that he does not see himself as the governor of all New Yorkers.

Not only that, it also appears that Cuomo thinks that, because he won the election, it’s time to kick out the opposition. If we’re such a minority and we’re so extreme (a term I will rail against on another occasion), why the compunction to tell us to leave the state?

If Progressives like Cuomo are so comfortable with their positions, why do they leap to discredit their opposition through character assassination and slanderous assaults on their basic human decency?

And maybe no one told him behaving like a Stalinist and hinting that you would like to purge your political opposition is also bad form for an elected official.

And maybe no one told Cuomo that his love affair with extending abortion is unpopular, even in commie blue New York.

According to a poll from last February commissioned by the Chiaroscuro Foundation (emphasis mine):

The findings conclude that an overwhelming majority of New Yorkers support sensible restrictions on abortions, with eighty percent (80%) opposing unlimited abortion through the ninth month of pregnancy and seventy-five percent (75%) opposing changes in current law so that someone other than a doctor can perform an abortion.”

Governor Cuomo’s proposed changes in New York’s abortion laws are clearly out of the political mainstream,” said Chiaroscuro Foundation president Greg Pfundstein. “While it is difficult to imagine having even less abortion regulation in New York, Gov. Cuomo’s special interest allies in the abortion lobby have come up with a few ideas, and they are all extremely unpopular.

Some of them, like allowing non-physicians to perform abortions, seem bound to make New York less safe for women. In fact, most New Yorkers favor adding sensible restrictions common in other states. It is imperative for Governor Cuomo to listen to what pro-choice and pro-life New Yorkers actually think before he acts in haste on this radical legislative proposal.”

So the governor’s proposals to make it easier to get an abortion aren’t even popular in a state that elected him with 62% of the vote. Who would have thought that 75% of respondents would say they oppose changing the law so that someone other than a doctor can perform surgical abortions? And he’s calling us the extremists?

Whenever Progressives claim to be pro-choice, or for freedom of speech, just remind them of Cuomo’s comments. Conservatives must expose the Left for what they are — Stalinists who need to eliminate their opposition in order to win.

Cuomo just removed the mask of the Left. Now it’s time for conservatives to run a candidate against him who will remind New Yorkers that while disagreement is healthy, Stalinesque purges of the opposition are not.

If there are enough people who are outraged by the Stalinist who is the chief executive of the state, maybe we can give him something he desperately needs: a pink slip.

As someone once said, “Voting is the best revenge.”