On the Tuesday edition of the Hugh Hewitt Radio Show, Hugh Hewitt was on a tear against Congressional Republicans for singling out active military, and those who retire after 20 or more years, for retirement cuts in the budget deal passed last month.

In the first hour, he spent two segments with Budget Committee Chair Paul Ryan (R-WI), where he rejected out of hand all of Ryan’s arguments.

Ryan tried to argue that they are forced to do this because “elections have consequences.” He didn’t seem to be bothered by the outrage this will spread among the base of the Republican Party, many of whom were already outraged about this last month.

There are many outrages about both this deal AND Ryan’s reaction to Hewitt’s questioning.

First of all, we were told in December that we had to agree to this deal because it took the threat of another government shutdown off the table. We had to make sure that 2014 was entirely about Obamacare and not the distraction of a shutdown.

That was thrown out the window last week with the so-called Bridgegate, and is even more out the window with the revelation that the promise to fix the budget deal in the new year has gone down in flames as well.

Ryan fell back on the canard that “elections have consequences.” He was just accepting this because Obama has been re-elected, but he seems to forget that his party controls the House. If elections have consequences, it also means we have divided government. Which means the GOP should be able to get better deals, seeing as per the Constitution, the House controls the purse strings.

Of course, this capitulation is part and parcel of the GOP’s never-ending attempts to surrender while pretending they aren’t. 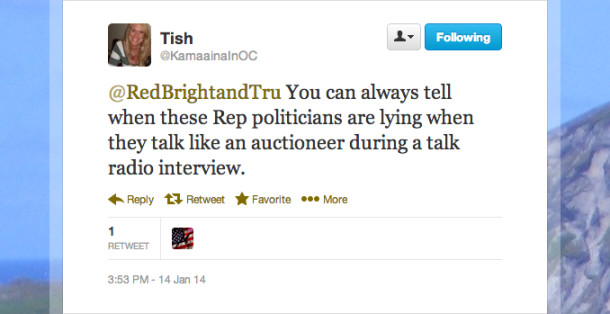 Ryan was talking nearly as fast as he was when Marco Rubio was trying to defend the amnesty bill which he claimed was not an amnesty bill.

Listen to the audio of that interview in it’s entirety.

(h/t The Truth Revolt and @YidWithLid)