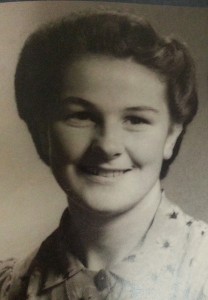 ME: Tell me about your wife …

She was only 16 years old, but she was big, if I showed you a picture. I said, “I’ll tell you what, you tell me your middle initial, and if I guess your name the first time, you’ll go out with me.”

So she said, “J.” And I said, “June.” And she said, “Somebody told ya!” I said, “No, that’s my mother’s name.” The few weeks we was there we went out, we got engaged, but we couldn’t get married, because the Army wouldn’t let the soldiers get married.

Well, we wanted to get married anyway. So, when we left and went up to New Caledonia  (the General thought we was getting’ too lax down there – so he took us up to New Caledonia). Well, we was there and my future brother-in-law stationed there in the New Zealand artillery.

I ran into one of the fellas wives there in Papa Kura, and she happened to write back and tell her husband, Sergeant Bill Chris, that she saw me in New Zealand. They didn’t know where I was at. They thought I was down in New Caledonia maybe shackin up somewhere. That’s how they got me.

Then, when they finally picked me up, they locked me up in the brig for three days, and brought me down to the Provost Marshall office.

And he said, “Corporal Storck, I been in contact with your outfit,” and he said, “I have never had such a request as long as I have been in this position.” They had asked that if he could give you me any leniency possible, they would appreciate it.

And he said, “If I can find you transportation to send you back will you be available?” I stood back and saluted, I said “Yes, Sir! I was wonderin’ how I was gonna get back!” ‘cause I stayed in uniform – I didn’t desert and so forth … they knew I was a 30-year man.

They used to send me on jobs and I’d be gone a month at least, very easy. You know, getting stuff off…so they covered for me all the way down. So I haven’t got a bad day’s time on my record. Even when I was gone I was covered. He gave me another month down there to spend with my wife, free gratis!

So, anyways, I come back with an Admiral and his staff on a PBY! We got out about a hundred miles and went down in the ocean! One of the engines conked out, because New Caledonia was like 1800 miles away, or something like that, and there was no way we could make it.

When we hit the ocean I thought we was under the ocean – they had little round windows no bigger than a foot that you can see out – and we hit that water so hard I thought we was under the ocean. We taxied back, and I knew where my wife was gonna be at 4:00 that day, so I got there, and I’m sittin in the office there reading a newspaper as she walks in the door. She had seen me take off that mornin’.

June 23rd in 1990, as we went back to Maine where I was originally from. I had my home back there, as we walked into the house, and I’m standing there putting the alarm off, my wife’s standin next to me, just like snappin’ your fingers, she dropped dead then.

When I called New Zealand and told the rest of the family, it was exactly the same day her mother had died 17 years ago before the same way.

All her life she always planned what she was gonna do when I die! Because when I drew Social Security at 62, which I didn’t want to do, they told me I had better draw it because they didn’t think I was gonna live to be 65 [laughter]. Anybody that told me that, they’re all dead! [laughter]

ME: You proved them all wrong! Tell me about how you were injured.

I was on the ship going into the invasion in the Phillipines when a kamakazi hit the water nearby – in the camouflage of smoke and flames, they can’t see what they’re going to hit. It blew me into the hold. I never came to for three days. It fractured my leg and broke my back in two places.

When they found me, they transferred me to the flagship of the battalion, the USS Appalachian, and put me in a cast. The ward man asked me if I remembered what happened. I said, “I saw the flash, but I never heard the bang.” After I come to, I said to the ward man, “Jesus Christ, I could have been dead and not known it.”

He said, “It’s a damn good thing you patted your leg when you did.” I said, “What do you mean?” He said, “They was gonna cut you open.” Cause if you got a compound fracture – I was paralyzed – to save their life, they have to operate. It saved them from cutting me open. That way they knew it was a simple fracture and not a compound fracture.

After the operation they transferred me at sea to the USS Mercy, a hospital ship, and took me to Manus Island off of Papua New Guinea – they had a big naval hospital there. I was still paralyzed, a touchy situation. So they flew me in a C-47 to Guadalcanal.

On the way to Guadalcanal, I’m on a stretcher, laying down, and one of the engines catches fire; and the pilot had one hell-of-a time putting the fire out shaking the plane up and down … but he got it out, and we landed in Guadalcanal at Carney Airfield. They took me to the hospital there, about a mile away from Carney Field, the 20th Station Hospital. I had helped build that hospital when I was in Guadalcanal before.

ME: Have you ever done anything that didn’t almost get you killed?

I was laying there, unconscious like … where am I. I’m in a stretcher, laying down. January 29, 1945. And I thought Jesus Christ, what the hell is going on. I didn’t know what the hell happened – tracing back in my mind. I’m in Guadalcanal, the action’s all over here, but it was a munitions ship that killed hundreds of guys that blew up.

While I was recovering, I had whiskers on me like this – I should show you a picture. In the hospital the Colonel says to me, “Soldier, I want you to shave those whiskers.” I said, “Sir, I’m paralyzed, I’m in the hospital, I’m an old-timer, 8 years in the service, what you gonna do to me?”

I said, “Sir, it took a long time to grow these whiskers and I’m not shavin them off til I get a picture taken with ‘em.” So he went and got his camera and took the picture. Then he said, “Now shave those whiskers off.” I said, “Sir, I know you’ve taken a picture of me, but I haven’t got it yet. When I get that picture I’ll shave them off.” So the next day I get the picture and I shaved the whiskers off.

ME: Well, that comes from your Trader days. You know better, eh?

When you was a scout, you had to camouflage your face. You either grow whiskers or put mud on your face. Yeah, and I had a nice crop.

My grandkids, last Christmas, they made me a book of pictures from the war, nice pictures.

ME: What are you doing now, these days?

Anyways, I still keep busy. I work at the VA Hospital on 6th Avenue. I go to work at 7:00 in the morning and don’t leave until 7:00 at night. [Note: Maurice heads up the Veterans National Stamp and Coin Club at the VA in Tucson]

ME: Is there anything you would like to have people do, or anything people could do to help you at the VA in some way?

We’d have to get somebody that knows something about stamps and sports and so forth. Otherwise, I’d be wasting my time – I put in more hours than anybody that works for me.

After the war, as I said, I was in the rackets, I was dealing in coins and stamps when I was in school. All through the war I was always dealing in stamps whether I was in New Caledonia or Guadalcanal; Japanese invasion money and stuff, and I done it all my life.

In fact, I’m the only living dealer in the whole world that attended King Farouk’s auction in 1954. I bought the bulk of his coin collection. When they kicked him out of Egypt in 1953, they had a big auction in 1954, and I was one of the nine American dealers that was invited to attend the auction.

There were other dealers from all over the world – and I knew them all, cause I used to go to Europe every six months, and, they’re all dead. I’m the last living member. I still got most of the coins that I bought.

ME: What do you do with the coins and stamps at the VA?

We send out shipments of at least $100, we send out stamps and coins, Sports Cards and stuff. It’s the best deal going for a shut-in veteran for rehabilitation. We used to have stamp clubs in the hospitals.

They write us every month and we send ‘em coins, stamps, Sports Cards and so forth. In fact, I give ‘em $5,000 worth of stamps and coins every year into the program. I give the VA $10,000 every year to pay for the television and everything else in the hospital. I give ‘em $5,000 for recreation, for research for the cardiology department and so forth. So I’ve given them over a quarter of a million dollars, if not more.

When I went to my Army reunion in October down in Fort Benning, Georgia, out of 40,000 soldiers there, they selected me to unveil the statue. 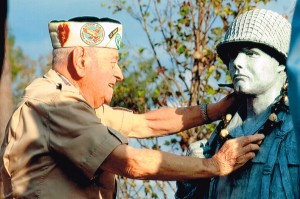 ME: Are you going to be attending the Arizona World War II Memorial Dedication, December 7, 2013? [The interview took place in November of 2013].

They already have a chair up there for me … I got a special invitation from the Secretary of State of Arizona [Ken Bennett]. I got a special parkin place in the lot and so forth. Bought the whole works at Crate and Barrel, even my chair [laughter]!

ME: I sure hope to see you there.

One good thing, I’ve got a fantastic memory. In other words, I could name … I got the picture of the original company here on the wall of 198 men, and I can name any one of ‘em and tell you where they died and how they died … I’ve been to many of the funerals and so forth.

The other survivor called me today. He was on an airbase getting a haircut, and when they discovered he was a Pearl Harbor survivor, they transported him up to Fort Dix, they had a big ceremony goin on up there yesterday, and they took him up there, dined him real well. He’s all by himself now, still in a wheel-chair.

ME: So many sacrifices. Thank you, again, for your service. Thank you for speaking with me today.