Wednesday morning marked the start of the House Oversight & Government Reform Committee hearings on diplomatic security in Libya, and the setting and seriousness were vaguely reminiscent of the Watergate hearings 39 years ago–with the exception that these hearings concerned government inaction that resulted in Americans being brutally murdered. 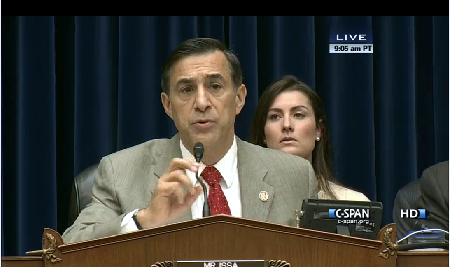 “The Oversight Committee mission reads ‘We exist to secure 2 fundamental principles. First, that Americans have a right to know that the money Washington takes from them is well spent, and second, Americans deserve an efficient, effective government that works for them.

Our duty on the Oversight and Government Reform Committee is to protect these rights. Our solemn responsibility is to hold government accountable to taxpayers, because taxpayers have a right to know what they get from their government.”

He set up the exact purpose of the hearings,”On September 11th, 2012, 4 brave Americans, serving their country, were murdered by terrorists in Benghazi, Libya.”

“Contrary to early assertions by the administration, let’s understand, there was no protest and cameras reveal that, the State Department, FBI and others have that video. Speaking of videos, the one in California…out there for a period of time, clearly had no direct effect on this attack. In fact it was September 11th, the 11th anniversary of the greatest terror attack in US history…it was that anniversary that caused an organization aligned with al-Qaeda, to attack and kill our personelle.”

Rep. Issa thanked Secretary Hilary Clinton for her complete cooperation in the investigation and tasked the committee with discovery that would amend security procedures in the future to safeguard American lives at hundreds of like facilities around the world.

Rep. Elijah Cummings (Democrat), Ranking Member, spoke next, “We grieve the loss of [sic]Ambassador Christopher Smith…” and those listening were puzzled that Mr. Cummings could not even honor the Ambassador with the correct listing of his name. 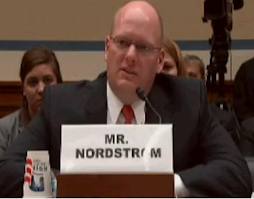 Those testifying before the panel were Lieutenant Colonel Andrew Wood (who had led the 16 member security detail stationed in Tripoli from February until it was pulled in August), Deputy Assistant Secretary Charlene Lamb, Under Secretary of State Patrick Kennedy, and RSO (Regional Security Officer) Eric Nordstrom.

Mr. Nordstrom was key in reporting the lack of sufficient security in Libya and wrote in a document dated October 1, the last paragraph read by Rep. Jason Chaffetz:

“These incidents paint a clear picture that the environment in Libya was fragile at best and could degrade quickly. Certainly not an environment where posts should be directed to ‘normalize’ operations and reduce security resources in accordance with an artificial timetable.”

Rep. Chaffetz, the individual who spearheaded the Benghazi investigation, was fired up as he narrated a group of slides which detailed attacks beginning in June 2012 and leading up to the Benghazi attack: the preceding bombings were tests by terrorists readying the jihadis for the September 11th attack.

“I believe, personally, with more assets, more resources, just meeting the minimum standards, we could have and should have saved the lives of Ambassador Stevens and the others who were there!”

Though he did not mention Secretary Clinton, all watching sensed the implication that Hilary only cooperated in the face of the looming Oversight Committee hearing. 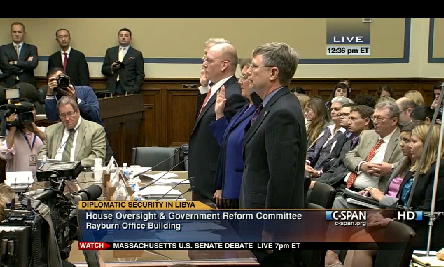 Another detail of note: all of the Democrat members of the Committee were seated on the left side of Issa (to the viewers) and the Republican members to his right. Many committee members mentioned “this side of the aisle” and there quite literally was a deep divide. Rep. Gerald Connolly (Dem, VA) urged members,”I certainly hope that today’s hearing is NOT going to be perceived as an effort to exploit a tragedy for political purposes 27 days out from an election.”

One would assume that the 11,500 people working for the US at its embassies and installations around the world, those who are waiting to be assured of appropriate security to ensure their safety, would most certainly not consider these hearings an exploitation. 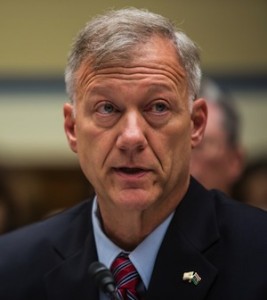 Lt. Col. Wood stoically spoke,”I feel a sense of honor for those who have died in the service of their country…the killing of a US Ambassador is a rare and extraordinary thing and requires our attention as a people.”

The Lt. Col. was the SST (Security Support Team) commander, and supported security movements for diplomatic officers in Tripoli and Benghazi.

He also worked closely with Ambassador Stevens, even running with him to provide security.

Wood’s measured words belied an undercurrent of emotions for a murdered friend and colleague. The State Department decided not to extend the Lt. Col.’s SST past the 5th of August.

RSO Eric Nordstrom testified,”The loss of Ambassador Stevens is not only tragic for his family, and sad for our country, but his death will prove to be a devastating loss for Libya, struggling to recover from its recent civil war.” He went on to note that the existing guard force was UNARMED, due to Libyan laws and sensitivities.

These hearings lasted 4 hours and 12 some minutes, thus, a detailed critique of the entire day’s testimonies and statements would be overwhelming. But there are some very key facts and assertions that should be highlighted. It was stressed that the US maintains 275 facilities around the world, some in very dangerous places.

Thus, the insinuations by some in the MSM that Christopher Stevens took unnecessary risks seem to be only innuendo. 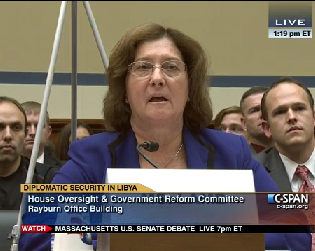 At one point, Darrell Issa asked Ms. Lamb if she had indeed said she would not support Eric Nordstrom’s “request” for more security, and when the Deputy Assistant Secretary looked befuddled, he augmented,”…it doesn’t meet your standard of perhaps what you call a formal request…but it does request more assets.” Issa elaborated,”Yesterday you told us, under penalty of perjury, that it wasn’t a request, it was a recommendation. Does the word request mean request?”

When pressed, Lamb finally purported,” Sir, we had the correct number of assets in Benghazi at the time of 9/11.”

Issa forcefully retorted,“To start off by saying you had the correct number and our ambassador and 3 other individuals are dead and people are in the hospital recovering…because it only took moments to breech that facility, somehow doesn’t ring true to the American people.” 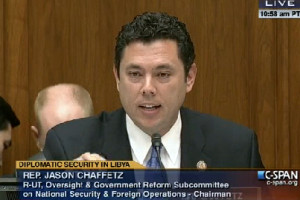 Rep. Jason Chaffetz queried Lt. Col. Wood,”Colonel Wood, did you participate in any way shape or form, in requests for additional personnel in Libya and what was the consequence of those requests?”

The Colonel replied,”Yes sir I did. I assisted Eric Nordstrom in requests for support in as much as they dealt with SST support. I reviewed some of the documents, and assisted in the preparation of those.”

Eric Nordstrom did not hesitate:

What became increasingly clear was, the State Department was asked for more security assets and denied those assets.

The State Department knew of preceding, lesser terrorist attacks intended to test the IED capabilities, and yet turned a deaf ear to requests for bolstered SST. There were repeated cables from Ambassador Stevens himself communicating those threats, to no effect.

At one point in the hearing, Undersecretary Kennedy stated that there were multiple reports concerning the 9/11 attack…but he could not remember a date when there was a conflicting report to the “WH Meme” that it was an organic uprising in response to a video. Kennedy sounded much like his boss, Secretary Clinton, as he repeated,”I don’t remember.” 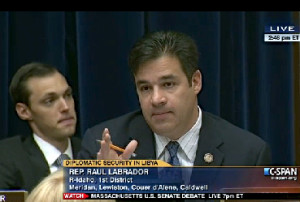 After that exchange, and after Lt. Col. Wood said what had happened in Benghazi was “instantly recognizable as a terrorist attack”, Rep. Raul Labrador stressed,”I just want to make it clear for the record, that on September 16th, Ambassador Rice, went on TV…said that all of the intelligence information led to one conclusion, when it is clear that intelligence experts, security experts, and even Ambassador Kennedy, looking at the information that was happening on TV could have concluded something different. I think it is outrageous, and it is shameful.” 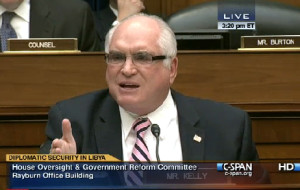 At 3 hours and 14 minutes, Rep. Mike Kelly gave an impassioned assessment,”It is absolutely preposterous to me, that we would watch Ambassador Rice go out and say what happened 5 days later, that I would sit in a briefing and no you have it all wrong, this is not a terrorist attack, this is the result of a 15 minute Youtube.’…it’s very unfortunate that terrorists don’t recognize that this is an election year…230 attacks in Libya between June of 2011 and July 2012. Of those attacks 48 took place in Benghazi…I’m gonna tell you, this thing smells!” 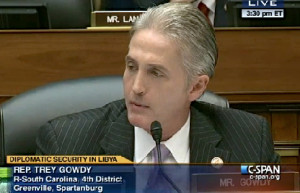 “This Administration blamed the murder of our Ambassador and 3 others on a video! …look at what Ambassador Rice, herself said ‘Our current assessment is that what happened in Benghazi was in fact initially a spontaneous reaction, which was prompted by a video.’

Mr. Chairman, I would like to have another hearing where we can ask Ambassador Rice, under oath, who told you what when!

And then we move to Jay Carney, who’s the spokesperson for the leader of the free world, and this is what he said Mr. Chairman ‘I’m saying, based on information that we, our initial information that includes all information, we saw no evidence to back up claims by others that this was a pre-planned or pre-meditated attack.

We saw that it was reaction that was sparked by this video.’ 2 representatives of this Administration gave demonstrably false statements, not just to us, but to our fellow citizens on national television!”

Not surprisingly, Rep. Cummings cautioned,”…to sit here and accuse one of our fellow citizens and Secretary Rice of lying…uh…that’s a very serious statement.” Certainly is.

Rep. Jim Jordan made a good point in closing:

“In a 13 month time-frame we had 230 security incidences in Libya, when the 231st happens, the Administration blames it on the video.We got 2 guys on the ground, who repeatedly asked for additional security personelle and are denied.”

Rep. Issa wrapped up the hearing:

“I’m going to close only with 2 comments. One is that you don’t reduce security at the same time as you’re increasing hazardous duty pay…that sends a message that says ‘we’ll pay you for the risk, we will not pay to have you made safer’.

Lastly, Colonel Wood…the United States military very generously delivers people for other branches…your time, working with the State Department is invaluable as you continue your career…I want to thank you for your service and use you as a conduit for so many men and women who, around the the world have added to what otherwise would not be there in the way of security and protection.”

America waits for justice  for 4 of our fallen, and the light of truth to expose what could and should be even more egregious a cover-up than Watergate. This is not a tale of wire-taps and burglaries.

This is much more heinous: because of  State Department ineptitude or callousness, adequate security was not put in place in Libya, resulting in the horrific murder of 4 Americans. And subsequent White House and State pressers, it seems, knowingly propagated a false story to thereby cover their actions.

The White House and State Department are culpable and Americans deserve justice, irrespective of a pending election.

The Wages of Courage