[The author sat down and interviewed his friend, Mike Shoop]

If Mark Kelly really meant to prove how easy it is to buy a gun, he picked the wrong time and place to do so, in Tucson at Diamondback Police Supply, with Mike Shoop behind the counter.

The story was first reported by Breitbart News , which also visited Diamondback for confirmation. I spoke with Mike about it recently.

In February, Mark Kelly tried to purchase a Sig Sauer 1911, a .45 caliber pistol, with a Texas ID. Mike had to turn him down. 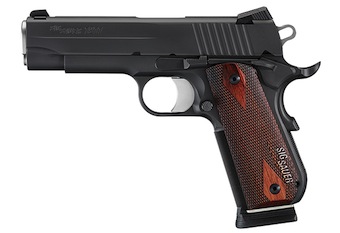 “That’s the first question I asked him,” Mike told me. “Do you have an Arizona driver’s license with your current residential address?”

No, he didn’t.  Then, on March 5th, Kelly returned with an Arizona driver’s license to complete the purchase. That day, he also purchased an AR-15. Shortly thereafter, Guns & Patriots editor, Neil W. McCabe, learned about this from “sources,” as he tweeted me. On March 6th, McCabe contacted Kelly’s gun control group, “Americans for Responsible Solutions,” to get a statement.

On March 8th, Kelly posted on Facebook, “I don’t have possession yet, but I’ll be turning it over to the Tucson PD when I do.”

Subsequently, Douglas MacKinlay, co-owner of Diamondback, rescinded Kelly’s purchase, posting on Facebook, “his recent statements to the media made it clear that his intent in purchasing the Sig Sauer M400 5.56mm rifle [AR-15] from us was for reasons other than for his personal use,” as required by question 11a on background check form 4473.

As a result, Diamondback donated the AR-15 to the Arizona Tactical Officers Association, made a contribution to the Eddie Eagle GunSafe Program, and Mark Kelly proved how hard it already is to legally purchase a weapon of this type.

I have to say, Mark Kelly really shot himself in the foot!

Honestly, only a dunce would believe that this was a publicity stunt. If Mr. Kelly really meant to prove how easy it is to buy guns, he should have used the Eric Holder “Fast and Furious” method – force gun sales to straw purchasers who would then pass them illegally to dangerous people. As it is, he himself made the purchase, thereby subjecting himself to all the rules, regulations and background checks already required to legally purchase a weapon. 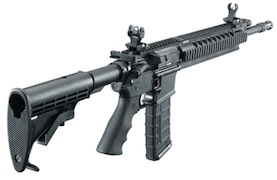 Now, Mark Kelly is something less than dangerous or suspicious as a purchaser of guns, and he has the resume to prove it. He’s a U.S. Navy Captain, a retired astronaut, and a Congresswoman’s husband, for starters. Also, he’s an advocate for responsible gun ownership. While I have never met anyone who advocated for irresponsible gun ownership, it really ought to be easy for him to make an immediate, over-the-counter purchase of anything short of a fully-automatic machine gun, right?

Perhaps Mr. Kelly thought that would be the case. Perhaps he thought that anyone could just walk in, buy an AR-15 and walk out. Maybe he really didn’t know what it takes to legally purchase a weapon – he didn’t do his homework. Maybe he just reads the papers and watches MSM TV, where it seems anyone can buy a weapon. If that’s all you do, then you probably will think that there isn’t enough ‘gun control’ already. 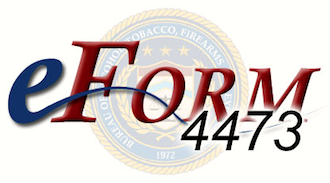 With his experience working at Diamondback, he ensures that all procedures are properly followed, and all safety rules observed. To purchase a weapon there, in addition to proper ID, one must either 1) have an Arizona Concealed Carry Permit, which comes with a background check, or 2) get an instant background check through the FBI’s National Instant Criminal Background Check System, or NICS. Then, fill out Form 4473 and you’re ready to go.

If the weapon was transferred from a third party there are additional procedures. A trade-in, like that AR-15, must be held for 20 days to ensure it was not involved in the use of a crime, which is why Kelly was unable to take possession.

The fact that even Mark Kelly could not simply walk in and purchase a weapon should be of great comfort to all those who don’t think we have enough regulation in this area. Mike Shoop is representative of the many professionals who deal with this every day, who ensure that people comply with the labyrinth of rules and regulations already on the books.

This is gun control in action!

We’d all like to minimize violence, but our world is not, and can never be, Utopia. None of the proposals in any of this new legislation would have made any difference at Sandy Hook Elementary. They only serve to further constrain law-abiding citizens. Criminals will not comply.

Meanwhile, Mark Kelly & Gabby Giffords can rest secure in the knowledge that they are well-protected by armed security whenever they want.

The rest of us don’t have a protective little shell to live in. Outside, there is a real world that is quite dangerous. In such a place, it would not be wise to leave one’s defense in the hands of a police state. Each is his own last line of defense.

In that world I may very well want one or more semi-automatic handguns and an AR-15 with a large-capacity magazine to protect myself and my family, just like Mark Kelly obviously did.

See other articles by servative.