“Under God” – two little words, redacted by our Commander In Chief from his recitation of one of the greatest speeches in American history – Abraham Lincoln’s Gettysburg Address.

President Lincoln’s message is strikingly succinct and profound. It is both timely and timeless. It bookends our Declaration of Independence – “that all men are created equal, that they are endowed by their Creator with certain unalienable rights” – with its fulfillment in Liberty, paid for by the blood and treasure of the Civil War.

It is often said that there are no atheists in foxholes. For Lincoln, the White House was a foxhole, and he was in that fight with his men. Unlike Obama, Lincoln could say with authority that his was “my” military. For men such as this, Divine Providence was an essential component of strength. To what higher authority can a President otherwise appeal for strength, wisdom and guidance?

Unlike Obama, Lincoln would have to wait for days or weeks to learn the fortunes of war. Meanwhile, long nights of prayer were all that stood between him and the specter of failure. Dear Lord, how could he stand it?

Lincoln knew the real costs of war – injury and death, suffering and loss, the wages of courage – paid by him and by his men. Yet, they did what they had to do. Without divine redemption there is only suffering, only suckers for the collective, sacrificing themselves … for what? 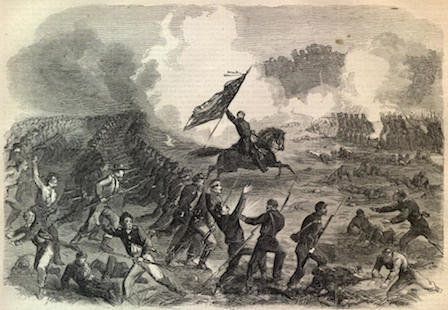 If not by God, then by what authority does a President claim to lead men in battle? By that of his Office? Surely, not – that would be Imperial. From the consent of Congress? Say it isn’t so! Surely Congress is not the ultimate authority in the universe.

It seems that a world without God is much more problematic for man than a world with God. I greatly respect the strength of those who live without the support of God – a Herculean task. I wouldn’t last a day doing that. And I greatly respect a-theists who understand and appreciate my point of view. Most are gracious enough to grant that there may be something to it.

So, five years into his Presidency, one would think that Barack Obama might at least appreciate the gravity of his Office enough to be humble, to bow before God, or at least to hope that God exists and to respect the faith of others.

Obama sometimes does show respect for religion, like when he refers to the “Holy Quran,” or to Islam as having been “revealed,”  or when he strikes all mention of “radical Islam” or “Jihad” from official concern. On the other hand, he seems overly concerned about peaceful religious expression by Christians in the military, and about citizens who “cling to their guns or religion” in general.

So why not just leave in the words “under God?” He could have. It wouldn’t have hurt. Was it because some of Lincoln’s draft versions didn’t include them? I doubt it.

A gracious man would respect Lincoln’s expression of appreciation for the role that God played in the establishment of Liberty for all men, that “this nation, under God, shall have a new birth of freedom.”

I suspect that Obama is not a gracious man. But I might be wrong – there are also other, less charitable explanations.