These two pictures, back to back, say it all: 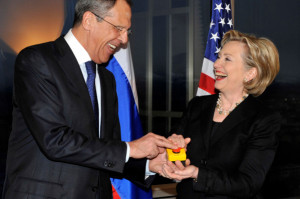 I’ll tell you how – President Barack Obama and Hillary Clinton did it after Obama was elected to demonstrate that Obama was right and how he was now in control. 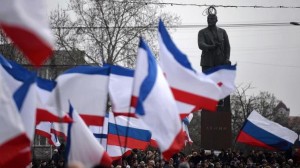 They wanted you to see with your own eyes that the world really is a safe place now, so no need for all those messy military weapons, plans or budgets.

They wanted to make fools of people like Mitt Romney, who warned that the Russians were “our No. 1 geopolitical foe.”

And of Sarah Palin, who predicted that Obama’s approach “would only encourage Russia’s Putin to invade Ukraine next.

And of Republicans in general.

They took a victory lap.

It was all a political show.  There was not then, nor has there ever been, a reset. It was another lie – a deceit, to be honest about it. They wanted us to believe in the reset:

This should be the end of the error of Hillary and Obama. Get over it, media! You were had. What’s worse, you volunteered to be had! You were the ones that ended up being made fools of.

Ironically, the Russian word Hillary chose for “reset” turned out to be the most honest word of all – “overcharged.” Overcharged is right! It was a con, and she is the con artist.

This should mean THE END of Hillary’s political career. No worries for her though – she can always join Bill on the lecture circuit. I hear there are lots of liberal “marks” there, and plenty of money to be made.

An Appeal to the Party of JFK