This is my fourth SHOTshow and for the first time I attended “range day.”

I mean, what’s the point of attending the worlds largest shooting, outdoor, and hunting trade show if you can’t fire some weapons?

Actually, I had the opportunity to go to the range last year.  But it was 36 degrees outside with about a 25 mph wind all day so nobody wanted to be out there. This year the weather was very agreeable: it was sunny and in the mid 60’s all day.

For those who are not familiar, SHOTshow is the biggest firearms-related trade show in the United States. It is massive.

Every firearm, ammunition, and outdoor gear vendor attends. It encompasses the entire Sands Convention Center in Las Vegas and spills over into the meeting rooms of the Venetian Casino and Resort.  If you’re looking for something remotely related to shooting or hunting and you are not working on classified military contracts, it’s probably at SHOTshow.

Range day is held on Monday. The morning session is for buyers and distributors; the afternoon session for the media.

At the range the manufacturers typically show off their new products for the year.  If those manufacturers like what they see, you will probably see it at your local gun store by the end of the year. Every possible shooting discipline is represented. 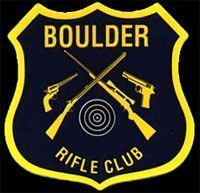 Range day is held at the sprawling Boulder City Rifle and Pistol club just east of Las Vegas.  Since the media only have four hours to traverse the entire complex, it is near impossible to stop at every booth and sample every new item.

I did however hit the booths that I think would interest the average shooter. Here is my rundown.

On the AR side, I am amazed at the ingenuity of gunsmiths who have gone to great lengths to create accessories that allow your AR rifle to come very close to fully-automatic fire. True full-automatic fire is, for the most part, pointless for civilians. It’s really difficult to control a weapon in full-auto mode.

Even the U.S. military doesn’t field full-auto rifles to infantry soldiers any more. But two or even three-shot bursts are controllable for just about anyone with practice. Most gun enthusiasts are familiar with the Slide Fire line of rifle stocks.

I got a chance to fire a semi-auto AK-74 with a Slide Fire stock and it took me a few rounds to get the hang of it. The good thing about the Slide Fire is that it can be disabled with the flick of a switch. And with practice, you can put some serious lead downrange.

The design is simple it’s not likely to fail on you. But it does modify the basic design of AK and AR-style rifles, so you would need to be careful when introducing it to new shooters. 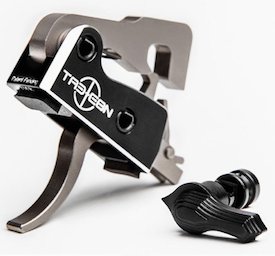 What was even more interesting to me was the new trigger assembly being introduced by TacCon. Their new 3MR or “three mode” AR trigger is beautifully designed and comes with it’s own safety selector. Those who are familiar with the AR rifle know the safety selector has three settings for the military, but only two for civilians.

There is safe, semi-auto, and three round burst for military rifles, but only safe and fire for civilians.TacCon’s included safety selector uses the full auto position on the safety selector to put the trigger into a mode that creates a very short trigger reset.

With practice, a shooter can “feather” the trigger to create near full-auto bursts. Even a novice shooter like me was able to shoot consistent two and three round bursts from an AR rifle. The trigger is not cheap, but for competition shooters or anyone wanting to put a “fun” switch on their AR, these guys are your go-to source.

I predict they will sell a ton of these.  Oh, and for those who think this trigger might skirt the laws on fully automatic guns, each trigger comes with a card from the BATFE stating that the trigger is fully legal for civilians.

Daniel Defense has solidified itself as one of the premiere AR rifle manufacturers. This year, they are introducing their own furniture for their rifles. They will now have their own line of stocks, grips and rails in a multitude of colors and camo patterns.

Since nearly every major AR manufacturer is selling a “Magpul-enhanced” version of their rifles, it is becoming harder for consumers to tell the difference between brands. Daniel Defense is not about to let that happen.

At the Daniel booth, I was able to shoot their suppressed .300 AAC Blackout rifle. Wow, was I impressed. Not by the suppressor, which performed as I would expect. The subsonic .300 AAC cartridge from a rifle-length AR felt like a .22 long rifle.