Now I understand why people like this cartridge. There are supersonic loads that naturally make more bang and reach out further. But any reservations I had about buying a .300 upper for my AR are gone. 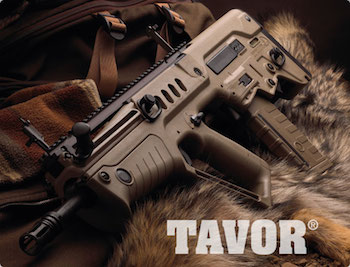 The other rifle I thoroughly enjoyed shooting was the IWI Tavor. This bullpup-style rifle is now a mainstay with the Israeli Defense Forces. I love the  balance of the weapon.

Having the action back near your shoulder makes the rifle easier to maneuver. With the mild recoil of the .223 Remington cartridge, it is very easy to put on target and fire multiple shots.

If you have the means and your state allows it, give the Tavor a long look.

On the concealed-carry side:

The elephant in the room is definitely Ruger. Their LCP, LCR, LC9, and LC380 lines of pistols have taken off like a rocket.

Ruger sold more than 600,000 handguns alone last year. All of the other manufacturers have been rushing to get a piece of that market. With states like Illinois adding shall-issue concealed-carry laws for the first time in decades, there are potentially hundreds of thousands of new customers who will need discreet carry firearms that have never needed them before.

Ruger is only introducing one slightly modified version of their LCR, the LCRx with an exposed hammer. But they are just now catching up with demand for everything else.

They did have an LC380 at the range, so I ran a couple of magazines through it. Very soft shooting. I personally would want the LC9.  But for the recoil-sensitive, it is a great pistol.

I really enjoyed shooting the Beretta Nano, which is unique in that it has no external controls, not even a slide lock release. The gun is very thin and with nothing to snag on clothing it would be a great choice for anyone concerned with deep concealment in a purse or pocket. 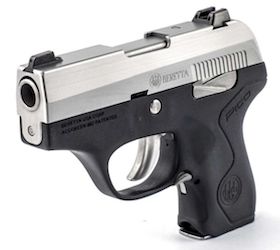 Beretta also has an even smaller model, the Pico, in .380. That one is a little small for my hands, but is essentially the same gun slightly downsized.

The grip, like on the standard XDs is very short. The extended magazine allows the shooter to get that third finger on the grip easily. The grip texture is a bit rough and may not be your cup of tea — so try before you buy.

The gun shoots and points naturally and the trigger is a familiar tw0-stage design any polymer pistol shooter should be familiar with.

Glock made some noise this year by diving into the small-pistol market. Until now, your only choice for a small Glock was the brick-like Model 26 which is downsized but by no means small.

The new Glock 42 is chambered in .380 and has a six round single-stack magazine. It shoots and handles just like any other Glock, only smaller. No one I spoke to was knocked out by the design or the choice of caliber.

Glock’s legendary reliability alone will sell a ton of these pistols. But the sense I get is that people were hoping for something different. My personal request is for a single-stack Glock 19 with the slide melt treatment they did on the 30s. Hopefully Glock will follow up with something like that in the near future. 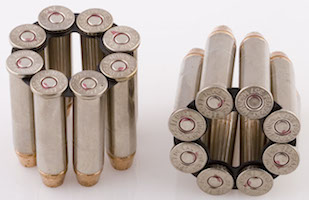 Smith and Wesson wasn’t showing off carry guns at the range. But they did have some interesting new models.

Legendary competition and trick shooter, Jerry Miculek, has partnered with S&W’s Performance Center to introduce an expanded line of competition pistols. The one that caught my eye was the Model 986.

The 986 holds 7 rounds of 9mm in a full-moon clip. Anyone familiar with moon-clips knows it is the fastest way to reload a revolver.

This is a gun designed for competition and the trigger and sights are wonderful for that purpose. But I’d love to see S&W expand on their use of moon-clip revolvers.

More later.  I’m off to the show floor.