This is the real test of freedom: will the tolerant left and the libertarians, once they’ve gotten the government to change the definition of marriage, allow churches to not perform same-sex marriages without threat of lawsuits?

The same people who are going on and on about “freedom to marry whomever you choose” will be the first to use the government to deny others’ religious freedom and freedom of association. The fact is, those of us who favor the definition of marriage that has lasted for thousands of years, and is the enabler of society, don’t wish to prevent homosexuals from getting together, but you have to understand it is not necessary to rewrite this most sacred institution to do so. 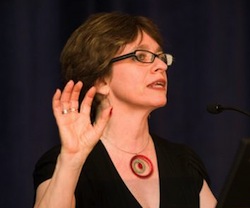 So many of the people who want the redefinition of marriage are the same people who have no reservations about forcing Catholics to subsidize birth control, and this portends that undermining religious liberty is part of their objective.

Take this for instance, from Georgetown University law professor Chai Feldblum, who is also an appointee to the U.S. Equal Employment Opportunity Commission. He is explicitly saying that the redefinition of marriage and the “freedom of LGBT people” trump religious liberty concerns:

“[F]or all my sympathy for the evangelical Christian couple who may wish to run a bed and breakfast from which they can exclude unmarried, straight couples and all gay couples, this is a point where I believe the “zero-sum” nature of the game inevitably comes into play. And, in making that decision in this zero-sum game, I am convinced society should come down on the side of protecting the liberty of LGBT people.”

For those who don’t see the encroachment on the First Amendment, just remember, when Massachusetts redefined marriage to include same-sex unions, Catholic Charities of Boston was forced to discontinue its adoption services rather than allow same-sex couples to adopt in violation of the teachings of their church.

So much for religious freedom and freedom of association.

Marriage is the single most important institution because it allows for procreation and raising children in a stable environment, which allows those children to grow into well-adjusted adults. We can’t rewrite that institution in the name of political posturing or some false notion of freedom.

There is no love of freedom on the left and before libertarians get in bed with them, just remember, when you lie down with dogs, you wake up with flees.