This story is developing right now, but an explosion as taken down two buildings on the Upper East Side of New York City.

1644 and 1646 Park Avenue (at 116th Street) have been reduced to rubble on Wednesday morning. NY1 reports that 1644 contained a Spanish church, a piano company, and residential apartments at the top.

As of this writing, Metro North Service has been suspended until further notice. 116th Street is also closed between 5th Avenue and Lexington Avenue.

Law enforcement tells CNN that there are no connections to terrorism as of now. CNN also reports that Con Edison was called to the block to investigate a gas leak moments before the explosion. A reporter for Telemundo 47 told News 4 New York that an eyewitness reported smelling gas before the explosion. 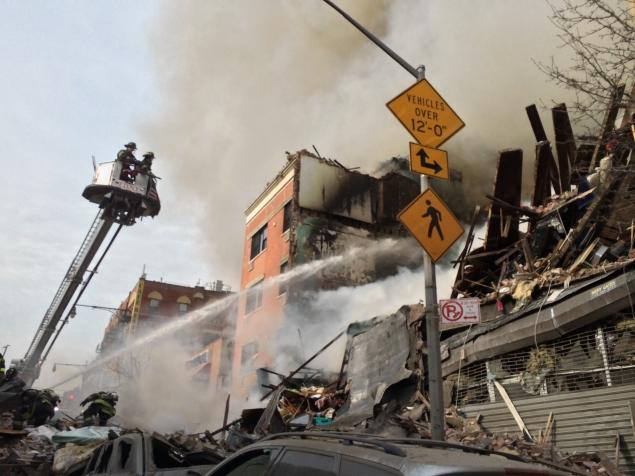 Keep those affected in your prayers as 16 have now been reported injured, 4 of them are severe. All the construction workers in the area have been accounted for but many others are still not accounted for.

For live coverage of the explosion and updates keep it here and tune in to News 4 New York.

UPDATE: News 4 New York has confirmed two fatalities thus far. This first was identified as a woman and the second was not. The names are being withheld. The New York Daily News reports that 22 are now confirmed to be injured and between nine and 12 people are still missing.

UPDATE II (4:30 pm ET): Ashley Rivera, 21, told the New York Daily News that an odor of gas had lingered for weeks on that block. Carmen Vargas-Rosa, the owner of the church that was destroyed in the explosion, told WCBS that there has been a gas odor nearby last night. She said:

“Last night when we came out of church, at the corner outside in the street there was a smell of gas. It would come and go, so I thought it was from the corner store there so I went to the owners and told them and they said they would look into it and then we went home.”

If these reports are true, that means what has been widely reported as the first call at 9:13 am ET to Con Edison was not actually the first call. This means that this explosion could have prevented. If these previous reports of gas were not called in, this means someone has dropped the ball.

UPDATE IV: (10:10 am ET Thursday): Four more bodies have been found amongst the rubble, raising the death toll to seven. Three of the seven have been specifically identified (two men and a woman have not been named, and it is not yet clear if the seventh victim is a man or a woman. The number of injured is now up to 74.

The Servant and the Master

Nelson Mandela’s True Legacy: the Good, the Bad and the Ugly